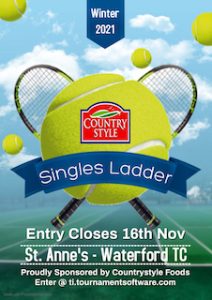 Entry for the first round of the Singles Ladder is now open. The ladder is open to all members over 16 years on 1st January 2021.

It is free to take part, however, please don’t enter unless you are available and willing to play at least 5 matches during the next few months (it’s not fair for other players in your group, if you enter and then don’t play any matches).

The ladder will be run using a standard league format. Players will be divided into divisions based on grade and recent results. All players in each division play each other once and get points for each match won. The top players from each division will be promoted to the higher division and the bottom players relegated to the lower division for the next round of the competition.

Initially, this is for singles only; the plan is to add a mixed ladder in the next round.

The Singles Ladder is proudly sponsored by Countrystyle Foods. There will be prizes for the winner in each group and for players who play the most matches.

The competition is hosted on Tennis Ireland Tournament Software, so results will go towards each player’s singles World Tennis Number (WTN).

Please use the following link to enter – https://ti.tournamentsoftware.com/tournament/4DC27A65-E929-44E8-B6AC-155F0BC8568E. Entry closes Tuesday the 16th of November. The groups will be published on Sunday 21st of November and matches will run until Sunday the 30th of January 2022.