There is evidence of tennis being played in Waterford in the nineteenth century. An old engraved brass-silver plate with the inscription of Waterford Annual Lawn Tennis Tournament 1880 Gentlemen’s Singles Handicap 1st Prize won by J. J. Hassard I.L.T.A is still on display in the present club. Given that Fitzwilliam and Monkstown Lawn Tennis Clubs were established in Dublin in 1877, Waterford would seem to have been one of the first clubs to be formed in Munster as Rushbrooke was only set up in 1884.

The second club operating in the John’s Hill area was called St. Anne’s Lawn Tennis Club and was in the grounds of the County Hospital on the land on which the new Cheshire Homes are now built. Tennis was played on the St. Anne’s courts from the mid 1920’s.

Neither club owned their premises.   Waterford Lawn Tennis Club was owned by the Waterford Protestant Cemetery Committee and was rented to the tennis club for an annual fee.   The grounds of St. Anne’s Tennis Club were owned by the County Hospital and were also rented on a yearly basis.   The hospital authorities decided in 1954 to reclaim the tennis club land at the end of the tennis season, supposedly for building extensions to the hospital though no building took place until the present Cheshire Homes were built in 2001.

The original ground, incorporating five grass courts, was purchased for £500 and an additional piece of land, corresponding to the area of present courts 6 and 7 was purchased for £750. The bank repayments to finance this purchase came from members subscriptions and revenue from dances in the old Nissen hut, which had been dismantled and removed from the former St. Anne’s Club and re-erected in the new club approximately on the location of the present clubhouse. That same year, 1963, the additional piece of land purchased for £750 was converted into two tarmacadam hard courts. The newly formed St. Anne’s-Waterford Lawn Tennis Club then had five grass courts and two hard courts.

The next development did not take place until 1977 when it became too expensive to maintain the grass courts in a reasonable playing condition due to two very dry summers in 1975 and 1976.   All five grass courts were converted to tarmacadam courts and the two existing hard courts were resurfaced at the same time.   The word Lawn was then deleted from the club name.

Plans to construct a new clubhouse to replace the primitive Nissen hut which had served for so many years, finally came to fruition when, in 1979, a two-storey state-of-the art clubhouse was opened.   Designed by Martin Tritschler and costing £55,000, the centrally heated clubhouse included a badminton/function hall, lounge bar, kitchen, and changing rooms with showers.  In order to pay for the new building, interest-free loans were given to the club by many senior members and by the parents of junior  members.

The newly built badminton hall brought a new  level of activity to the club and teams were soon entered in the local leagues and provincial competitions where they performed with considerable success.   Coaching of juniors was so successful that a number of St. Anne’s-Waterford junior members were selected to play on interprovincial teams.

In the 1980s, it became popular to erect flood lighting in tennis clubs and St. Anne’s-Waterford erected lights on courts 1,2,3, and 4. It was intended to erect the lighting on the other three courts when finances would allow. This happened in 1990 when all seven hard courts were converted to all-weather artificial grass courts. This turned out to be the catalyst that popularised tennis in Waterford as, within a few years, a waiting list for membership had to be established.

In 1996, part of the land at the rear of The Limes, John’s Hill, next door to the tennis club, came on the market and sufficient land was purchased to erect a further two artificial grass courts.   These courts were also floodlit with special low level lighting to prevent over-spill of lighting into adjoining houses.   The existing practice wall area was also converted into two miniature (half-sized) courts for small children.   These also had an artificial grass surface.   The club now consists of nine full-sized floodlit artificial grass courts and two unlit half-sized children’s courts.

In January 2000, the existing clubhouse was completely refurbished.   The bar area was enlarged and extended out over what was once the badminton hall, interest in badminton having waned considerably over the previous years.  The bar is now capable of seating approximately 150 people.   The dressing-rooms, kitchen and toilets were also completely redesigned and redecorated.   A walk-around balcony was erected around three sides of the upper floor enabling play on all courts to be viewed.   The new clubhouse was completed in time  for the Annual Inter-Firms Competition in May 2000 and was officially opened by Minister Martin Cullen, T.D. on September 3rd 2000. 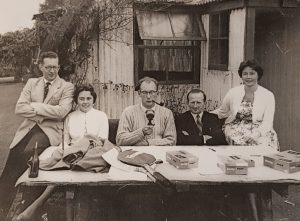 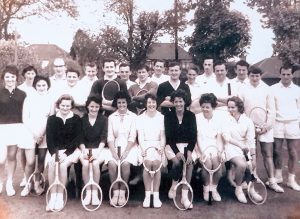 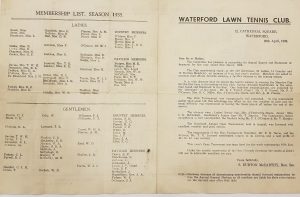